Tag Archives: The Girl from Everywhere

Staff Review: The Girl from Everywhere 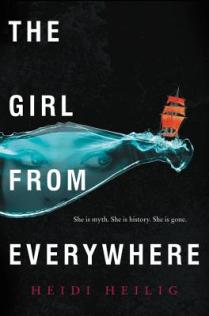 The Girl From Everywhere

For those of you seeking one roller-coaster of an adventure without leaving your chair, then The Girl From Everywhere written by Heidi Heilig is the book for you. Once I started to read the book, it became impossible to put it down. This story focuses on a sixteen year old girl named Nixie or Nix for short: a girl born in Honolulu, Hawaii in 1868. A girl who since then has been sailing around the world on a ship with her father and various other crew members, from century to century, country to country. The setting of them traveling around on one huge ship from sea to sea has that whole Pirates of a Caribbean kind of feel. On the way they collect numerous exotic species, one of them being a rare bird that Nix manages to steal from a bird keeper in India, that has the power to cure any illness by simply looking the sick person in the eye.

Nix’s father sees her as nothing but bait. He will use her to get whatever he needs, wherever he needs, no matter how dangerous the situation may be. His main objective is to get back to 1868 Honolulu Hawaii where the story all began, to reunite with the love of his life before she died giving birth to Nix. Unfortunately, the future won’t look bright for Nix if she does help her father. Instead it will cost Nix her own life.