Molly needs everything perfect. It is getting harder and harder every day. Her mom left and she has an idea to get her back.This is a book that gets better and better with every page. Once you start it you, will not want to stop. I would rate it 6 out of 5 stars. If I were you, I would grab this book before it becomes hard to get a copy.

Kyle Finds Her Way is a great book. I would give this book four stars. Susie Salom  gives lots of detail.  Kyle is a great character because she sticks up for her friends. I liked the part when Kyle has to join the school NAVS team ( a problem-solving competitive group that competes)  and has to make it work. I couldn’t put the book down.  This is a book for people who like realistic fiction.  I encourage people who like those books to read it.

This book is full of thrilling action and suspenseful excitement. There are creative characters and backstabbing traitors. Farley Middle School has an amazing mascot that is being plotted against by three harmless children. Those children are not jocks but they think that if they steal the mascot and then give it back like they didn’t steal it they will be able to get what they really want. There is a backfire in the system named Pablo.  I really enjoyed this book told in play format! 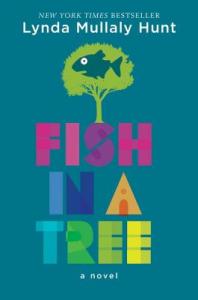 Fish In A Tree

Fish In A Tree is an incredible book about a girl who has one unbelievable challenge she has to get through. Ally Nickerson has a case of unidentified dyslexia. She had to make it to 5th grade without anyone even noticing. When her original 5th grade teacher has a baby, a permanent substitute named Mr.Daniels comes. He is the only teacher that realizes that Ally isn’t dumb, she is just different. This book is full of sadness, hope, and even some happiness. If you liked One For The Murphys, or Out Of My Mind you will love this book too. I am really glad that I came across this book. It turned out to be one of my favorite books.

Saving Mr. Terupt by Rob Buyea is the third book in a series I really love. This book shared another school year full of experiences of Buyea’s characters/Mr. Terupt’s students.

Mr. Terupt’s fifth grade students: Peter, Anna, Jeffrey, Alexia, Danielle, Luke and Jessica, make posters, raise money, and try to save their favorite teacher’s job as their town suffers unexpected budget cuts. Which teachers should keep their jobs?  Which teachers should go? Is there a way to do it fairly?

I enjoy how the author breaks apart the story so that each character has their own opportunity to speak and share how they feel about a specific setting, event, or what’s going on at home.  This is definitely a book I would recommend to people who like determination, adventure, and friendship changes. 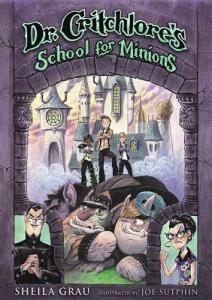 Minions! Now, I know what you’re thinking … no, not the yellow one-eyed creatures from that movie, despicable me, but a servant that carries out the evil plans of his/her master. Runt Higgins, twelve years old, is training to be one at Dr. Gritchlore’s School for Minions. The school year gets off to a very of a rocky start when a video is posted on “Monster Tube” of some “girl explorers” scaring away alumni ogres of Dr. Gritchlore’s school down a cliff. Runt, once again, gets put into the wrong dorm. He is a werewolf, not a human. When Runt tries to talk to Dr. Gritchlore things doesn’t work out either, because he is busy watching soap operas. As if those problems aren’t enough, Runt also has to deal with group of first year zombies that wont stop following him. It’s up to Runt and his friends to stop whoever is sabotaging the school. Luckily he has some good friends: Skye, the tree nymph who is like his sister, Frank, 25, who’s head keeps popping off, and Darthin the mad scientist who dresses like a gargoyle.

I really liked this book. It grabbed my attention and I couldn’t put it down. I loved that there was still modern stuff (with a little twist) like DPGs or Dungeon Positioning Systems, or the MMA tournament (Mixed Monster Arts). I also liked the funny quotes or precepts at the beginning of each chapter such as, “An overlord with out a minion is like a toothless shark. – Dr. Gritchlore, in an advertisement.”

Some things didn’t quite add up in the end, but overall the book was very enjoyable. The comedy fantasy and mystery made Shelia Grau’s Dr. Gritchlore’s School for Minions a very pleasurable read. I would give it 8.9 out of 10 stars.

Paper Things, by Jennifer Richard Jacobson, is a really enjoyable book because the characters seem real. The plot and setting is well planned. Ari and her older brother, Gage, leave their guardian’s home. They have nowhere to stay, and they keep traveling to friend’s houses to stay overnight. Meanwhile, Ari’s grades are going down and it gets harder and harder to keep her friends. Ari has two choices, either she can stay with Gage, or she can go back to Janna, their old guardian. Which one should she choose? Paper Things, is an intriguing book, that I would recommend.

Absolutely Truly by Heather Vogel Frederick was phenomenal. My favorite part about it is the funny characters, especially Truly Lovejoy. At almost six feet tall she definitely stands out. When her father loses an arm in the war, her family decides to move to Pumpkin Falls, New Hampshire to take over the family bookstore. One day at the bookstore she finds a mysterious letter in an old copy of Charlotte’s Web. With her new friends she follows clues around town. Will Truly solve the mystery before it’s too late? Find out in the new novel by Heather Vogel Frederick , who visited Morse Pond School.

Morse Pond Reviews: To Be a Cat

To Be a Cat

This is now one of my all-time favorite books! This book is a perfect twist on Freaky Friday! It is relatable to and easy to understand, as well as being funny and a little creepy. The main character Barney wishes he was a cat because he thinks it would be so much easer to be one. He thinks that he wouldn’t have to deal with his mean Principal Mrs. Whimpire and the school bully Gavin Needle. Little does he know, Mrs. Whimpire is a cat who turned into a human, and hates all humans especially little boys. Barney turns into a cat, and is soon being hunted down by Mrs. Whimpire’s minions (A.K.A. The Swipers), who have orders to destroy him. Will he turn back into a human, or will he get caught by The Swipers? This is a fantastic book! Read to find out!

Davies’ observations of nature are transformed into poems by Hearld’s glorious illustrations. This book will encourage any child with an ounce of curiosity and creativity to create their own nature journal.

This book is a retelling, for children, of the book Irene Pepperberg wrote (Alex & Me : How a Scientist and a Parrot Discovered a Hidden World of Animal Intelligence —  and Formed a Deep Bond in the Process) about her language research with the African grey parrot Alex. At a time when bird intelligence was considered extremely limited, Alex proved to Pepperberg and the scientific world that he possessed vastly more smarts than anyone had guessed, and a boatload of personality as well.

Malcolm is such a small rat he’s mistaken for a mouse when he becomes the class pet in Mr. Binney’s fifth grade. Soon Malcolm joins the Midnight Academy. The Academy is a secret society of the pets from all the classes, and they’re a varied lot. In fact, some of them may be traitors, allied with the unknown threat that lives in the clock tower. Malcolm has to manage tricky relationships with both the humans and the other animals. The writing is charmingly believable, and the many illustrations add another lively dimension.

A quick read based on a true story. A massive silverback ape, Ivan, lived for years in a cage in a faltering roadside attraction. When a baby elephant is added to the menagerie, he realizes she will be condemned to this humiliating drudgery unless he can come up with a way to free them both. Much of the book’s strength lies in the way it recognizes the power of language.

Bestselling author Applegate presents an unforgettable and uplifting tween animal fantasy that explores the power of friendship, art, and hope with humor and touching poignancy. Illustrations.

Lulu needs money, never mind for what, and decides her best gambit is a dog walking enterprise. She certainly does NOT want any interference from Fleischman, the goody two-shoes boy down the block. Lulu is terrible with the dogs, Fleischman keeps trying to be helpful. Chapter by chapter, compromise by compromise, they negotiate their way to a true partnership.